In my word for today on practical wisdom read here https://bit.ly/3b6jXhl, I wrote about growing up among our elders who would use Proverbs to teach us wisdom.

Many of these Proverbs also taught respect.

Respect for yourself, your elders, your family name, our gods, for animals, and even the environment.

Respect is such a highly placed value that they'll even teach us that you do not need to like a person to show them respect and kindness.  You did so because it was the right (cultured) thing to do.

Our traditional ways weren't perfect, of course, because sometimes respect was not reciprocated. If an Elder offends you, you'd be made to apologize, if you offend an Elder,  you will also apologize 😭.

This, of course, gave rise to an illusion of rudeness because as we grew up, the unfairness of such a  system became galling and some of us, some brave ones began to "rebel" (for want of a better word.) Anyway, this is gist for another day 🤓

At the top of the respect, hierarchy is self-respect aka self-regard, aka self-preservation. My people ( I am a sweet Yoruba Angel from southwest Nigeria) were wont to say "knowing one's Worth is the height of wisdom, one who refuses to respect himself would become an object of abject ridicule". 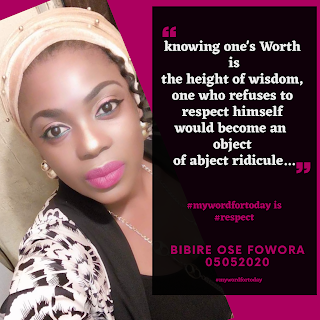 They will also say "the respected visitor is one who enters into a town and carries himself with respect".  My people place such a high premium on self-respect going by the number of Proverbs on same and the constant harping on knowing your worth and respecting yourself.

But what is respect? I have found that the term means different things to different people. So in defining respect, we've got to take into consideration the different beliefs, views and perception of different tribes and cultures in many parts of the world.

What is normal in my part of the world is probably abnormal in other climes.

In SW Nigeria, we go on our knees for females, and prostate for males to greet persons older than we are. Respect is a doing word, something that is shown by actions.

A respectful woman in Nigeria is typically one who does not address her husband by name,  probably kneels down to give him food and would not call her husband's relatives and siblings by their given names. 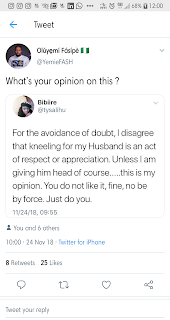 I remember a rather mischievous tweet of mine (see a screenshot above) that generated a lot of furore among our Men folk. I was basically saying that kneeling down to show respect, a rather perfunctory act in my view, for my husband, is not really an indication of being respectful, and that I believed that kindness, civility, being selfless was a better way of showing respect.

In the final analysis, respect is earned, not shown. I respect our cultural practices, but respect should not be used as a smokescreen to disrespect another.

Respect yourself enough to remove yourself from people and practices that take away your peace and well-being. This includes your habits, be it sleeping, eating, working out and negative people.

Respect the environment by treating her with care (oh btw, I am also an environmental enthusiast) because what you give, you get back, perhaps double.  Respect the living things, plants, animals we share a symbiotic relationship. If bees become extinct, the effects will be catastrophic.

Respect other people, their ethos and their space. Like I said before our normals differ.